Despite being titled the Royal Society for the Protection of Birds, the RSPB could perhaps be better thought of as the Royal Society for the Protection of Biodiversity! We take a keen interest in all the wildlife that lives on our nature reserves, and much of our effort goes into managing the habitat for scarce plants, insects, reptiles etc., rather than just birds.
At Hazeley Heath we work hard to promote two of our threatened butterfly species, the silver studded blue (below) and the grayling. 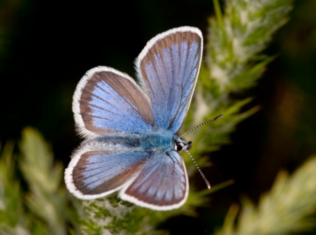 Both of these heathland specialists are in trouble in the UK. For butterfly recording purposes, the country is divided up into 1km squares. According to Butterfly Conservation, for both silver studded blue and grayling there has been a decline of more than 40% in the number of occupied squares since the 1970’s.
Both species need open, unshaded heathland, with areas of short vegetation and patches of bare ground. Grayling are found more in drier areas, with bare, sparsely vegetated ground, while silver studded blues like areas of short heather. However, silver studded blue is dependent on certain species of ant, which protect the caterpillars from insect predators. They even pupate within the ant nest. This means that we must ensure conditions are right for the ants, as well as the butterflies! Fortunately the ants are also associated with open heathland with a mixture of short vegetation and bare ground.
Our habitat management includes removing trees to create more heathland, creating areas of bare ground and mowing patches and strips in the heather. This work involves using machinery such as tractors, JCBs and even large 360 degree excavators. It can sometimes seem a bit brutal, and not always what people might associate with a nature reserve! However, the varied habitat that the work creates doesn’t just benefit the butterflies. The bare ground created by the machinery supports specialist heathland insects, including tiger beetles and solitary bees, while areas of short vegetation provide foraging opportunities for woodlarks (one of our key heathland birds). Even wheel ruts can provide valuable bare ground for invertebrates!
Does it actually work? The answer seems to be yes, as shown by the two figures below (note that the RSPB only acquired the site in December 2012) 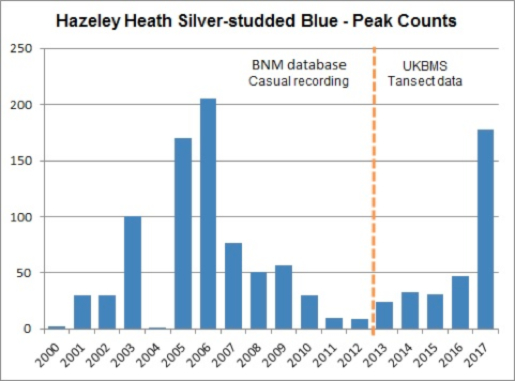 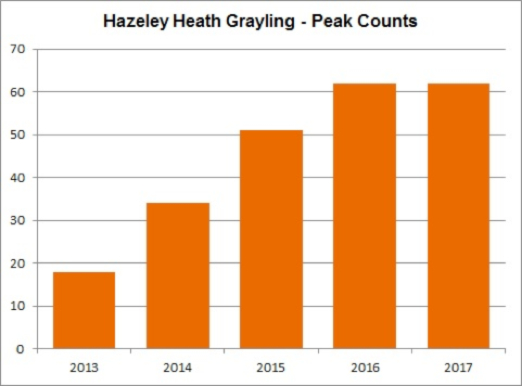 The silver studded blue graph needs to be interpreted with caution, as the methodology changed when the RSPB took over, switching to a transect based approach. However it does give a good indication of trend – they were declining, now they are increasing. Unfortunately grayling were not monitored at all prior to 2013 but the trend is clear – increasing for the first four years, before levelling off last year (a period of heavy rain at the beginning of the flight period in late July probably accounts for the 2017 results)
Can we improve Hazeley Heath still further? Butterfly Conservation recommend that sites with these butterflies should be grazed, and we are currently going through a legal process to enable us to do so. Hopefully, things will get even better for our heathland butterflies!
If readers have any questions about our work at Hazeley Heath, please feel free to contact me on 01252 795632/07771 975852 or e-mail at mike.coates@rspb.org.uk